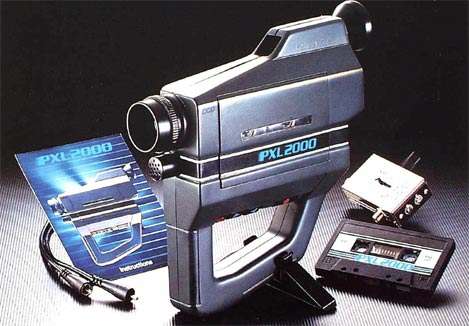 Video on an audio cassette.
Pyke notte thy nostrellys
Top

I remember those. It was a "cheap" alternative to VHS camcorders, and it succeeded in being cheap in all but price.
Top

TOS wrote: i keep reading that word in the title as "pornographers"

Freud was right about you ...
intellectual/hipster/nihilist

I still have a roll of film in a bag that needs to be developed. I just opened a huge box of cassette tapes from 20 years ago when I wrote and recorded songs on my Tascam 688 MIDIStudio. I found another huge box of CDs from 20 years ago that I have not listened to until I just found them as well as a small beach radio with a CD player in it that I just hooked up to all my speakers. My vinyls sound better, played on a 25 year old DJ turntable. I just bought 7 vinyl albums at a Record Fair that was in my neighborhood 2 weekends ago with dozens of dealers selling records. It's an incredible time we live in, and everything feels slightly backwards and sideways. I'll most likely never go back to using film when I just took 400 pictures at a birthday party and sent out about 30 of the nicest looking shots. I did find a collection of developed family photographs in photo albums over the last 40 years or more, and the only value is seeing candid images of family. The actual photos are all terrible by photography standards of criticism. This is a small slice of what I've been up to lately.
Top
Post Reply
44 posts